In February I talked about the things I collected while writing Cress, and on Monday I gave some behind-the-scenes info on the inspiration and process behind writing Cinder.

Today, we’re peering into the black folder for Scarlet . . .

WARNING: THE REST OF THIS POST INCLUDES SPOILERS FOR CINDER AND SCARLET. 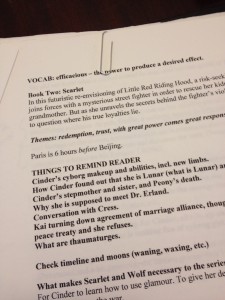 Once you get into the second book of a series, you’re faced with a constant balancing act. You have to quickly engage your reader and keep the story moving forward, while also reminding them (in a natural, non-intrusive way) about what happened in the previous book so they’re not confused. Here I made my list of the major points I needed to remind readers about as soon as possible. (Note also the brief summary of the book and my early concept of the book’s major themes. Though these things often change during revisions, I like to have at least a tentative idea of them from the beginning so I can try to keep the “big picture” in mind while I’m outlining and writing.) 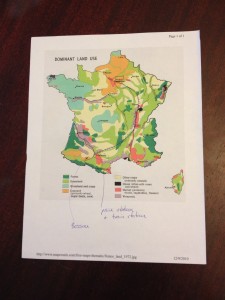 This is a map I printed out showing the main agricultural areas in France. This first helped me determine what sorts of crops Scarlet and her grandmother would grow on their farm, and it also gave me some ideas for the path Wolf and Scarlet would take to get to Paris (since I knew I wanted them to end up in a forest). 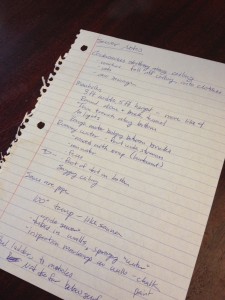 My black folders are full of research notes. Here are the notes I took while watching the episode of Dirty Jobs in which Mike Rowe has to trudge through a sewer system, so I could apply the most gruesome and realistic details to the scene in which Cinder and Thorne do the same. 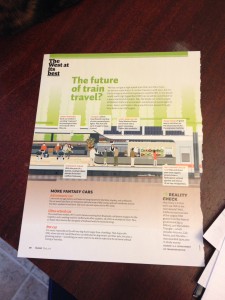 An article from Sunset magazine theorizing some accommodations we may have to look forward to in our train travel. Not many of these ideas made it into the book, but it did get me to start thinking beyond my own limited knowledge of train travel. 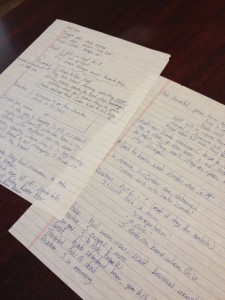 I mentioned in my post on Cinder’s black folder that I’m always trying different plotting techniques. Here I was trying to build my plot using the “Quest Decided > Action > Quest Thwarted > Reaction > New Quest Decided” method. I *think* I heard about this method from Victoria Schmidt’s writing guide Book in a Month, but I’m not sure. Anyway, it’s a pretty basic way to build your story and figure out the overall progression of your novel. 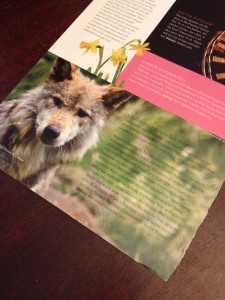 An article from South Sound magazine talking about local wildlife protection groups. I think this is where I first heard about Wolf Haven in Olympia, WA, which I did eventually visit for my research on wolves and wolf packs. (If you’re ever in western Washington,  I highly recommend giving them a visit. It’s so fascinating, and the wolves are gorgeous!)

Three folders down, one to go! One Friday I’ll be giving a sneak (non-spoilery) peek at some of my early inspirations for Winter.