“. . . it unfolds with the magic of a fairy tale and the breakneck excitement of dystopian fiction.” –Publisher’s Weekly (starred review)

Humans and androids crowd the raucous streets of New Beijing. A deadly plague ravages the population. From space, a ruthless Lunar people watch, waiting to make their move. No one knows that Earth’s fate hinges on one girl. . . . Cinder, a gifted mechanic, is a cyborg.

She’s a second-class citizen with a mysterious past, reviled by her stepmother and blamed for her stepsister’s illness. But when her life becomes intertwined with the handsome Prince Kai’s, she suddenly finds herself at the center of an intergalactic struggle, and a forbidden attraction. Caught between duty and freedom, loyalty and betrayal, she must uncover secrets about her past in order to protect her world’s future.

She’s trying to break out of prison—even though if she succeeds, she’ll be the Commonwealth’s most wanted fugitive. Halfway around the world, Scarlet Benoit’s grandmother is missing. It turns out there are many things Scarlet doesn’t know about her grandmother and the grave danger she has lived in her whole life.

When Scarlet encounters Wolf, a street fighter who may have information as to her grandmother’s whereabouts, she has no choice but to trust him, though he clearly has a few dark secrets of his own. As Scarlet and Wolf work to unravel one mystery, they find another when they cross paths with Cinder. Together, they must stay one step ahead of the vicious Lunar Queen who will do anything to make Prince Kai her husband, her king, her prisoner.

In this third book in the bestselling Lunar Chronicles series, Cinder and Captain Thorne are fugitives on the run, with Scarlet and Wolf in tow.

Together, they’re plotting to overthrow Queen Levana and prevent her army from invading Earth. Their best hope lies with Cress, who has been trapped on a satellite since childhood with only her netscreens as company. All that screen time has made Cress an excellent hacker – unfortunately, she’s being forced to work for Queen Levana, and she’s just received orders to track down Cinder and her handsome accomplice.

When a daring rescue goes awry, the group is splintered. Cress finally has her freedom, but it comes at a higher price than she’d ever expected. Meanwhile, Queen Levana will let nothing prevent her marriage to Emperor Kai, especially the cyborg mechanic. Cress, Scarlet, and Cinder may not have signed up to save the world, but they may be the only hope the world has.

In this fourth book in the bestselling Lunar Chronicles series Winter despises her stepmother, and knows Levana won’t approve of her feelings for her childhood friend–the handsome palace guard, Jacin. But Winter isn’t as weak as Levana believes her to be and she’s been undermining her stepmother’s wishes for years.

Together with the cyborg mechanic, Cinder, and her allies, Winter might even have the power to launch a revolution and win a war that’s been raging for far too long. Can Cinder, Scarlet, Cress, and Winter defeat Levana and find their happily ever afters?

Mirror, mirror, on the wall, Who is the fairest of them all? Fans of the Lunar Chronicles know Queen Levana as a ruler who uses her “glamour” to gain power. But long before she crossed paths with Cinder, Scarlet, and Cress, Levana lived a very different story—a story that has never been told … until now. 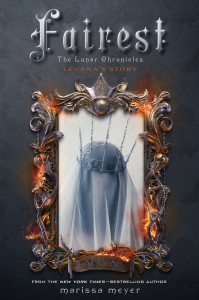 Marissa Meyer spins yet another unforgettable tale about love and war, deceit and death. This extraordinary book includes full-color art and an excerpt from WINTER, the next book in the Lunar Chronicles series.

The universe of the Lunar Chronicles holds stories—and secrets—that are wondrous, vicious, and romantic. How did Cinder first arrive in New Beijing? How did the brooding soldier Wolf transform from young man to killer? When did Princess Winter and the palace guard Jacin realize their destinies? With nine stories—five of which have never before been published—and an excerpt from Marissa Meyer’s novel, Heartless, about the Queen of Hearts from Alice in Wonderland, Stars Above is essential for fans of the bestselling and beloved Lunar Chronicles. 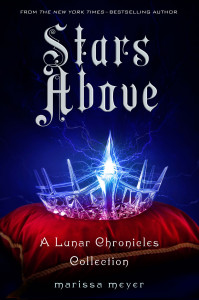 CONTENTS The Keeper: A prequel to the Lunar Chronicles, showing a young Scarlet and how Princess Selene came into the care of Michelle Benoit. Glitches: In this prequel to Cinder, we see the results of the plague play out, and the emotional toll it takes on Cinder. Something that may, or may not, be a glitch…. The Queen’s Army: In this prequel to Scarlet, we’re introduced to the army Queen Levana is building, and one soldier in particular who will do anything to keep from becoming the monster they want him to be. Carswell’s Guide to Being Lucky: Thirteen-year-old Carswell Thorne has big plans involving a Rampion spaceship and a no-return trip out of Los Angeles. After Sunshine Passes By: In this prequel to Cress, we see how a nine-year-old Cress ended up alone on a satellite, spying on Earth for Luna. The Princess and the Guard: In this prequel to Winter, we see a young Winter and Jacin playing a game called the Princess and the Guard… The Little Android: A retelling of Hans Christian Andersen’s “The Little Mermaid,” set in the world of The Lunar Chronicles. The Mechanic: In this prequel to Cinder, we see Kai and Cinder’s first meeting from Kai’s perspective. Something Old, Something New: In this epilogue to Winter, friends gather for the wedding of the century…

In her first graphic novel, #1 New York Times and USA Today bestseller Marissa Meyer follows Iko, the beloved android from the Lunar Chronicles, on a dangerous and romantic new adventure — with a little help from Cinder and the Lunar team.

In her first graphic novel, bestselling author Marissa Meyer extends the world of the Lunar Chronicles with a brand-new, action-packed story about Iko, the android with a heart of (mechanized) gold. When rogue packs of wolf-hybrid soldiers threaten the tenuous peace alliance between Earth and Luna, Iko takes it upon herself to hunt down the soldiers’ leader. She is soon working with a handsome royal guard who forces her to question everything she knows about love, loyalty, and her own humanity. With appearances by Cinder and the rest of the Rampion crew, this is a must-have for fans of the bestselling series.

Read the first chapters at thelunarchronicles.com

The world of the Lunar Chronicles comes alive in this thrilling continuation of Wires and Nerve. Iko–an audacious android and best friend to the Lunar Queen Cinder–has been tasked with hunting down Alpha Lysander Steele, the leader of a rogue band of bioengineered wolf-soldiers who threaten to undo the tenuous peace agreement between Earth and Luna. Unless Cinder can reverse the mutations that were forced on them years before, Steele and his soldiers plan to satisfy their monstrous appetites with a massacre of the innocent people of Earth. And to show he’s serious, Steele is taking hostages. Cinder and Kai, Scarlet and Wolf, Cress and Thorne, and Winter and Jacin all feature in this epic new battle. But it is Iko who must face her deepest fears when she uncovers the truth about her own unusual programming. Questions of love, friendship, and mortality take Iko on an emotional journey that will satisfy and delight fans of this bestselling series.

Read an excerpt at thelunarchronicles.com

Cinder’s Adventure: Get Me to the Wedding 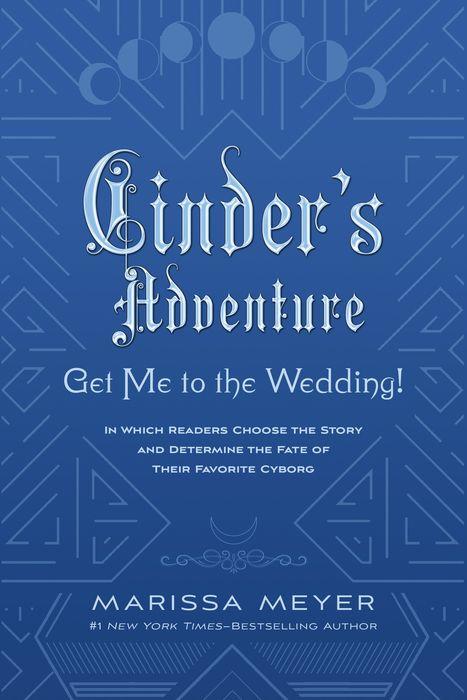 Cinder, the star of the Lunar Chronicles, is getting married! She and Emperor Kai have made it to their big day – now all Cinder has to do is show up and say “I do.” But it’s not so easy when there are twists and turns and obstacles along the way, and you, the reader, are in control of her fate, along with the many friends and strangers she meets on this adventure. Can you and Cinder make it to happily ever after?

For fans of the #1 New York Times-bestselling author Marissa Meyer, this is the ultimate interactive celebration of all things Lunar Chronicles. And, bonus: you’ll also discover characters and settings from Heartless, Renegades, Instant Karma, and Gilded, along with so many possible endings!

This inventive and fun adventure is a must-have for fans, only available as an e-book exclusive.

Disclosure: I am an affiliate of Bookshop.org and I will earn a commission if you click through and make a purchase.