For the grand opening of this blog, I’m spotlighting some of my favorite blog posts and moments from over the years throughout the month of June.

I’ve spent the last couple days going through Cinder copyedits and am, oh, about halfway through it right now. I can’t really say it’s been FUN (I’d so much rather be working on Winter right now), but it has been interesting! 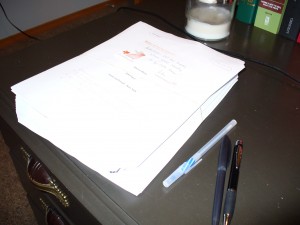 1. They check for spelling and grammar and make corrections, usually per Merriam-Websters Dictionary and the Chicago Manual of Style, and sometimes your publisher’s specific style guide.

2. They check for consistency (like ensuring your hero’s eyes stay the same color or somebody’s name doesn’t change spelling halfway through the book).

3. They query anything that doesn’t make sense, either on a sentence-by-sentence level or on a larger plot level if necessary (although hopefully any big holes would have been spotted during revisions with your agent and editor).

4. They mark the manuscript for the typesetter. Stuff like: “set this paragraph in a different font,” or “make this apostrophe curly, not prime,” or “insert thin spaces between ellipses.” Fun stuff like that.

Most copyedits are still done on hard copy. Although Microsoft Word does have a handy track-changes feature, it’s easy to let errors creep in when using it. Plus, for whatever reason, it’s still easier for the human eye to spot mistakes on paper.

The edited manuscript is then sent to you and your editor.

Going over the copyedits is proving to be a stranger experience than I’d expected. It turns out there can be a surprisingly thin line between “author’s style” and “grammatically incorrect.”

Then there are little things that I may prefer, even though it goes against what Chicago or Merriam-Webster prefer. (Example: Chicago says words combined with like should NOT be hyphenated, i.e., wolflike, but I think that’s the dumbest rule ever and always include a hyphen. So now I must decide if that hyphen is worth fighting for or not.)

Here are some tips for going over the copyedits, with the reminder that I’m still learning. 🙂

1A. Know Your voice. This is more difficult than it sounds, and I’m not exaggerating when I say that I’ve sometimes spent ten minutes agonizing over whether or not a sentence is better with a comma. Some edits will have you questioning if you want the sentence to be “right” or to be “you.” When I talked to my editor about stetting changes that seemed a matter of voice or style, her response was: “Hold on to anything you want. The copyeditors do their jobs and sometimes we have to undo them.”

So how to decide? Read it in your head. Read it out loud. Read it with the surrounding text. If your gut reaction says that it’s just fine – or better – the way you’d written it, then it’s perfectly acceptable to stet the change.

Remember, your editor fell in love with YOUR voice, not the copyeditor’s.

{Note: “stet” is the editorial term used to say “leave it alone.” So when you don’t like a change, you draw a dotted line beneath it and write the word “stet,” circled, beside it or in the margin. This tells the typesetter not to make the change.}

1B. Know Your Terminology. Related, but different, is the terminology specific to your book. Particularly with sci-fi and fantasy, any world-building creates its own words and language. It’s a copyeditor’s job to check that things are spelled correctly and follow modern grammatical rules, so it’s not uncommon for them to mark odd terminology to be changed to something more common. When this happens, know your reasons for having the terminology the way it is and stet at will. (That said, if you don’t have a good reason, maybe consider taking the copyeditor’s suggestion.)

Example: There are races in my futuristic world called Lunars and Earthens. The terms would be on par with “Americans” or “Europeans,” but the copyeditor marked to make them lowercase to reflect “martians” and “earthlings.” My editor and I agreed to keep the terms capitalized.

2. Don’t be afraid to look it up. I know, you’re a writer, not an editor, but it’s still a good idea to own a copy of the latest dictionary and style manual. Copyeditors are human – they can make mistakes. If you think they’ve marked something incorrectly, then check it! You might even learn something new. (I did, in fact, learn a new word while going over my edits!)

3. It’s okay to edit the edit. Sometimes if the copyeditor has noted that a sentence is awkwardly worded, they might suggest a potential rewrite. I’d say about 90% of the time, I see their point about the awkwardness, but instead of using their suggested revision, I’ll rewrite the sentence in a way that feels natural to me. Again, it’s about being confident in your own voice.

4. Talk to your editor. Be sure to keep sticky notes nearby so you can flag pages with edits you’re unsure about or things you may want to query, then email or set up a phone conversation to go over them with your editor before returning the pages. That way you can be sure you’re both on the same page.

That’s it for today, I may have further advice to impart once I’m finished.