As can be said of most writers, I grew up with a crazy overactive imagination. One of my favorite fantasies was always the “Mysterious Clue Found in an Awesome Crumbling Old Mansion that Ultimately Leads to Buried Treasure / A Magical Wardrobe / An Ancient Artifact that Was Most Likely Cursed by Some Witch After She was Wronged by Her False Love or Whatever.”

We all wanted to find something cool like that, right?

Well, unfortunately for me, I did not live in an awesome, crumbling old mansion, complete with secret tunnels and bookshelves that opened into secret rooms. (Though I maintain the dream that if I ever became crazy rich, I will be building a house that has these things. Because what else would you do with all that money, anyway?) Alas, I grew up in a brand new house. As in, no previous owners. As in, no chance of there being any forgotten, mysterious clues or letters loitering around.

So naturally, I felt it was my duty to start leaving some mysteries behind for whoever might own the house after us.

Fast forward about 15 years, and this last week my brother was… er, I actually don’t know what he was doing. Fixing some bedroom molding? Unsticking a stuck drawer in the bathroom? But whatever he was doing—he found… 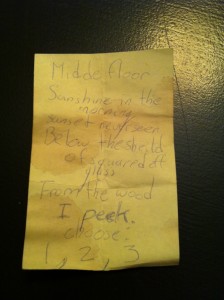 Sunshine in the morning,

Of squared off glass

From the wood I peek.

How’s that for some awesome treasure-hunting poetry skills, yo?

While the clue obviously leads to the three east-facing living room windows, I’m afraid whatever clues that followed have long since become victim to my mother’s mad cleaning skills. Sad, too, because I do remember burying a “treasure” in the woods across from our house, and I’m going to guess that’s where this clue would eventually have led to.

But I guess we’ll never know…