When I started writing Heartless, waaaaaaay back in 2012 (!), I decided to try an experiment. For the entirety of working on this book, I would record every single hour I spent on it. How many hours did I spend researching, brainstorming, outlining, drafting, editing, and on and on? I was honestly curious to know, because writing a book is rarely a streamlined experience. You spend a couple hours on it one day, then work on editing another project in the afternoon. You spend a dedicated month on drafting, then take a two-week break to focus on promoting something else. The end result is that, going into this experiment, I truly had NO idea how long it took me to write a novel. I knew that it took me two years to get Cinder ready to sent to literary agents – but that was also while working full-time and going to school, as well as working on fanfiction at the time. I knew that Scarlet had taken me nine months to turn into my editor, but those nine months had also included promoting and touring for Cinder and writing the first draft of Winter.

The point is that all the hours get really jumbled up! So recording my time for Heartless was my attempt to un-jumble them.

And the results have been fascinating – at least to me!  In fact, I wish that I had recorded hours for all of my projects these past few years, including the graphic novels and the first superhero book, because it’s actually had some practical applications. (Such as determining my hourly worth when it comes to saying yes or no to paid speaking engagements, or estimating how much time I needed to revise a book with an approaching deadline.) I plan to start tracking my hours again starting with my next book, and look forward to being able to compare and contrast them.

The time log is not an exact science. Some gray areas include:

One: There are lots of tasks that blur together. (Do I include the entire time I’m on book tour? Decision: No, only the hours spent at or preparing for events. Should I include the time spent writing a newsletter that promotes Heartless if it also promotes other projects? Decision: No, because that’s promoting me as an author, not this specific book. Etc., etc.)

Two: Sometimes I simply forgot to track the hours – and ironically this tended to be when I was busiest on the book, such as when I forgot to track them during the NaNoWriMo when I wrote the ENTIRE first draft, then had to go back at the end of the month and try to estimate how many hours it had taken. Similarly, the months spent promoting tend to be very disjointed (a 45-minute blog post here, a 30-minute phone interview there…), so I tend to forget to write it down and then have to try to remember everything I did after the fact.

Three: Some things simply aren’t trackable, such as that brilliant idea you get in the shower, or the hour spent daydreaming while running errands that ultimately leads to a great plot twist.

And Four: Every book will be different. Some books are longer than others, some are shorter. Some have plots and characters that come together easily, others require months of outlining and revising until you feel you have them right. Some books require loads of upfront research, others are fairly minimal. You get the point.

And of course, every writer is different, as well.

BUT, all those caveats aside, I thought it was an interesting experiment. I’m glad I did it – and I hope some of you will find it interesting, and possibly even useful, as you work on your own writing projects as well!

Click here to view a PDF of the entire time log, which includes specific dates and tasks.

Or, in handy graph form: 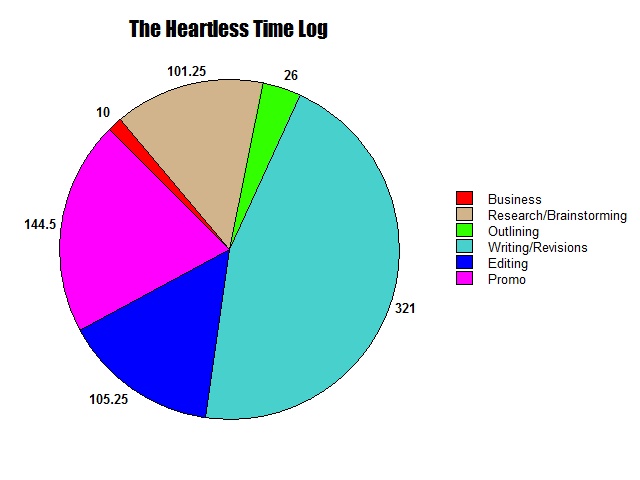 And there you have it. It took me 708 hours to write and promote Heartless, or approximately 18 weeks (at 40 hours/week).

This exercise has made me curious about a few things regarding my process. Such as – if I were to increase my time spent brainstorming and outlining, would it decrease my time spent revising? And am I still spending too much time on promotion? (I feel like I’ve cut WAY back on promo since my first few books came out, but 144 still struck me as an insanely high number! Of course, I say that after spending two hours preparing this blog post…) And how consistent would these numbers be with other novels? Heartless, in hindsight, felt like an easier book to write than either Cress or the first superhero book (though all three are of similar length). I’d love to know if that would have shown in the numbers.

Anyway… that’s all from my neurotic Type A personality today.

Back to the actual work… writing!