I’m having a brain-dead blogging day, so I thought I would just talk about some things that are making me happy right now.

My brother and sister-in-law had their first baby a few months ago and he’s getting SO BIG and so RIDICULOUSLY ADORABLE. Cutest Baby Ever Award? I think so.

I’ve listened to Wincing the Night Away on practically constant repeat for five years now, and I was so so happy to hear The Shins had a new album coming out this year. And once I finally got my iTunes figured out and my iPod up and working again, it was the first thing I downloaded. Now “Simple Song” owns my heart.

I was convinced to join Pinterest by my other sister-in-law a few months ago and while that initial “ooh pretty shiny new thing!” feeling has worn off, it’s still hanging on as one of my favorite things right now. It’s like all my obsessions gathered into one place and held together by pretty pictures. Geekiness! Pretty clothes! Random eerie photography! Crazy expensive dream homes with pools in the living room! Love.

My best friend since middle school has spent almost our entire adult lives moving around, and then she was in California for a long time, but her and her husband just decided to move back and buy a house. Yay! Coffee dates and nostalgic movie nights FTW!

I think they are lying about that “110 calories” thing, because they are easily 200 calories worth of yum.

One of my local theatres (which is a Regal Cinema, so this could be a franchise-wide promotion) is doing $5 Tuesdays throughout the summer and it’s like the best thing ever. I love seeing movies in the theatre, but at $11 a-pop I always end up waiting for it to come up On Demand. Not anymore! I’ve seen three movies in the past month and have a growing list of upcoming ones I want to go to.

(Tangent: Has anyone seen the previews for this upcoming movie about a writer who brings one of his characters to life? Um, yes, I will see that.)

Only three months away now and I have IDEAS.

I recently bought new office furniture and re-did the arrangement, and I love it. It’s so much more relaxing and feng-shui feeling. I still need to get a fun reading chair and put pictures back up on the walls (I miss my Nanowrimo posters!), but once that happens, I will be sharing photos!

Geek-out, I know, but this show cracks me up. I never know when the new episodes are going to run, but there’s some channel that’s been airing, like, nightly marathons, which is just perfect for resting my brain if I’ve been writing all day.

I ordered these pins up a few weeks ago and squealed when they arrived. I then proceeded to put one on every jacket I own. ^^ If you come to any tour events, I should have some to give away as well! 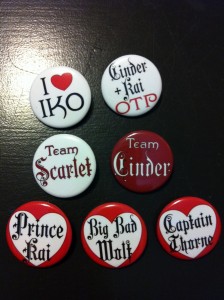