During the Scarlet blog tour last month I wrote a post about some things I’ve learned since the release of Cinder. One of those things was how to pack for a two-week tour without having to check any luggage.

Which seemed to pique some questions on how, precisely, one manages that.

So allow me to present all my packing and traveling wisdom, after four multi-city tours and countless conferences over the past fourteen months:

First, my biggest cheat. The Scarlet tour was two weeks long, so I decided to pack enough clothes for one week and do laundry halfway through. This is the first time I’ve used laundry service (this was also the longest amount of time I’ve been on the road) and it worked out pretty well. Most hotels have this available, but it is expensive. Check with your publisher: If they’re footing the bill for the rest of your travel expenses, they might cover this one too.

Don’t pack boots or enormous heels that you’ll only wear once before they cripple you or bright orange sandals that only go with one outfit. Instead, pack one or two pairs of shoes that work in multiple types of weather (It was 80 degrees in Florida and snowing in New York during this last tour), that go with everything else you’re bringing, and that don’t take up too much space. My bulkiest shoes, sneakers, were left out and worn to the airport. 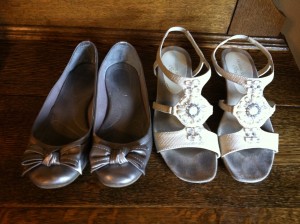 Most luggage has all sorts of handy pockets and belts for strapping things down. Use them. They really do help. Here, I put the shoes in the side pockets and my undergarments and stockings in the top netted pocket. 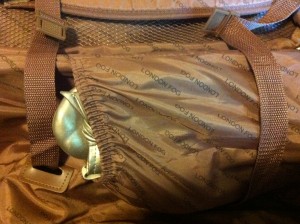 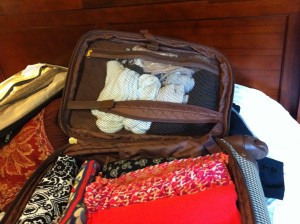 My itemized clothing for this trip came to: 5 camisoles, 5 sweaters, 1 pair of jeans, 1 light jacket, 2 scarves, misc. slips and leggings, 5 dresses, and 1 skirt. Everything got folded neatly and placed in the bottom of the suitcase, except for the dresses and skirt which were rolled. I learned this trick on YouTube. Supposedly it takes up less space (I’m not entirely sure that’s true, but it certainly doesn’t take up more space), and it helps cut down on wrinkles.

Not that you won’t ever have to iron. After four or five days in a suitcase, some things are just going to get wrinkled.

Note: I wore the bulkiest items, such as jeans and my jacket, to the airport. 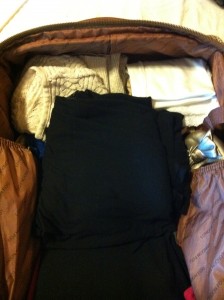 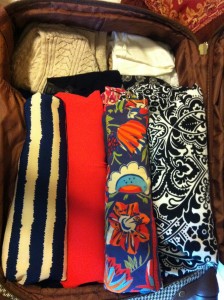 Toiletries go in last because you want easy access to them during airport security. If your suitcase has a sizeable exterior pocket, put them there! (Because I was traveling with my husband, he ended up putting the toiletries in his own backpack, which was very handy, but here I’ll show as if that wasn’t the case.) 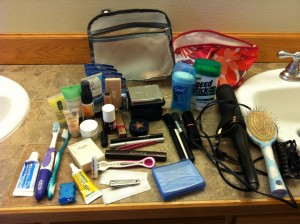 All liquids go in the clear bag per security regulations, everything else goes into the floral bag. Bulky extras, like my hairbrush and curling iron, get tucked around the edges of the suitcase—and had been buried entirely by the time I took this picture.

Men, you don’t have to worry about this, but ladies, learning to make do with a clutch purse is one of the best things that’s ever happened to me. Most women use up their second “carry on” item with an enormous satchel, where things get jumbled together and you can’t fit half the things you’d like to into it. Instead, curate your true necessities down into a clutch purse and then that will live in a larger carry-on bag, such as a laptop bag or briefcase. 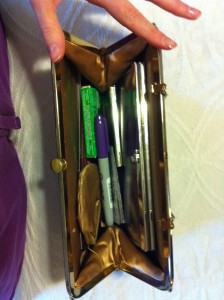 My necessities: Wallet with ID/cards/cash, business cards, notebook, pen, Sharpie, gum, lip balm, lip gloss, nail file, a bandaid (because you never know when you’ll need a bandaid), and bookmarks (because inevitably one of the airport security guys will ask why we have a box of 300 “I Love Kai” buttons and it’s just easier to explain things with a bookmark).

My clutch purse, along with my laptop, nook, my husband’s iPad, a notebook, my itinerary, tissues, and protein bars all fit into my laptop bag. Way better than a bulky purse, right? 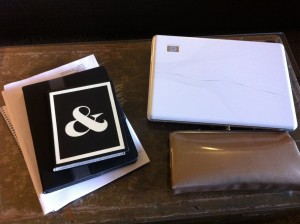 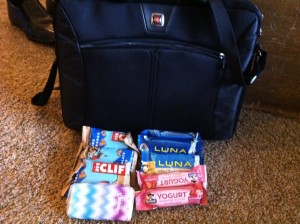 I don’t actually have a trick for the swag, other than I keep mine in a pretty tin box that keeps it all organized, even though it sometimes gives me trouble going through security. This time, because my husband was with me, he got stuck with it in his luggage (ha!), but normally it lives in the bottom of my suitcase between my shoes.

Non-Magical Tip of the Day: Leave Some Room

Believe it or not, I still had space left in my suitcase when it was all packed, which ended up being a very good thing. Because you will collect things during your trip! Souvenirs for yourself, gifts for folks back home, and—most randomly—gifts from readers and fans who come to your events.

Here are just some of the things that were added to the luggage during the tour. (Not shown are four additional books—because you can’t send an author into 8 billion bookstores and not expect her to buy some books), three new shirts that were purchased during the trip, and plenty of yumminess from fans that got eaten before this picture was taken.

I was able to fit all this in without letting out the suitcase (meaning unzipping that extra zipper that gives you more space inside), which means the bag remained within carry-on proportions. 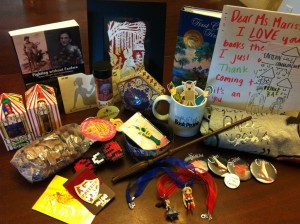 And yes, that is a wand. We may have spent a day in The Wizarding World of Harry Potter.

There are definitely some perks to being on tour. ^_^

So… that’s pretty much all I know about that. Any questions?